Kempton’s Queen’s Prize may not be quite the race it was a couple of decades ago – demoted to the final race by the racecourse executive tells its own story – but after a quiet winter, Seamus captured the once-prestigious two-mile handicap on the Sunbury course yesterday with Cayirli, springing a 50-1 shock in the process.

Not that it was that much of a surprise to Seamus, who said: ”Cayirli had been off the track for 18 months with a few issues, but he was runner-up in the Queen Alexandra Stakes at Royal Ascot in 2016 and has always been a very talented horse.

“After such a long absence this was very much the prep for a £40,000 staying handicap at Newbury on Friday week, and for Cayirli at least it can keep on raining through the summer.

“We will plan his campaign around soft ground, and if he got those conditions we would look at Royal Ascot again, though we’ll also monitor France and Germany, where he would be more likely to get his ground.”

"I was confident enough, in fairness," says Seamus Durack, whose Cayirli struck at 50-1 in the Queen's Prize at Kempton. The trainer will look towards the Queen Alexandra or Ascot Stakes 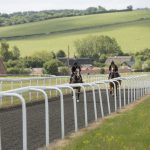